Deadlifts in the Mosh Pit

Welcome back.  This week's blog reading music comes from my all time favourite, Ginger. **WARNING** Contains an exceptionally rude chorus that's so catchy you'll end up singing it without realising and offending loved ones or work colleagues. 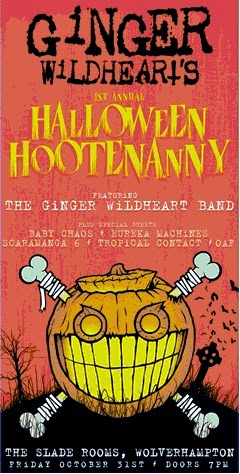 What a great week I've had.  Ginger is this week's music because this past weekend was one I've been  looking forward to all year, the first ever, hopefully annual, Ginger Wildheart's Halloween Hootenanny, held in Wolverhampton with 6 bands (including the fantastic Eureka Machines) and an almighty piss-up with the great online community that surrounds the bands.  Diana came with me for Halloween and headed home to London the next day while I went on to Manchester to see Ginger and Eureka Machines play another gig and meet up with another group of people I previously only knew online.  Now, I made some provisions to make sure this wasn't a total write off health-wise, packing healthy snacks for the train, getting a good breakfast in before we left and hunted out healthy, protein rich salads for lunch but Kat does tell us it's OK to have a cheat day once in a while and if I was going to have one this was going to be it! Still I avoided beer (mostly), but did get a post-gig late night drunk-burger and a spectacular breakfast to smash the hangover both of which included *gasp* GLUTEN (Kat would tell us that gluten is more horrific than anything Halloween can dish up).
Diana and I also went out to dinner on the first night and I finished with a coffee, my first coffee since this whole process started, a super powerful Turkish coffee at that, and it set me off like a rocket. What a beautiful brew it was, but after being off the stuff for a while a dose this hefty drove me giddy, felt like I was having palpatations.  That's what killed Dee Dee Ramone...  apart from it was with heroin obviously.


Now if you read Week 1 you'll remember that before I started this 12 Week fitness program I was in a pretty miserable state and it's amazing how the booze kicked me right back to it once it wore off. Not the hangover (I deal with that like a trooper) but for a day or two later the old familiar black cloud settled in.  One of the big things about this process is recognising how the choices we make are affecting us and it was clearer than ever to me after last weekend that alcohol really causes my mood to plummet (not at the time obviously, that's a picture of a happy chap above) and not for anything in particular, I'd just had the weekend of the year, just a general miserable bleakness.  Recognising that the after effect of alcohol had probably messed me up rather than just reacting to that fact that I was down really helped in turning it around quickly.  Also, no more booze 'till Christmas, I like being happy.


So the weekend was a bit of a cheat but I was right back to it when I got home, off to the pool for a swim (44 lengths, a new record) and back in the 12 Rounds gym this week to hit pads for the first time in ages which was great fun and also our weekly weight training session with Kat. Weight training I'm starting to really enjoy as I can see the improvements week on week as we add bit more weight to the bar, there's something really satisfying about moving something heavy around (not so much chin-ups, my body is still too much weight to lift).  I particularly noticed it this week when I headed out to see extreme metal band Anaal Nathrahk (here's their cover of a Specials song, not for the feint of heart).  Plenty of stagediving going on and the moshpit was full of people flying all over the beer soaked floor (I had water, told you I'm off the sauce 'till Chimbo), I was standing just at the edge of the pit so had quite a few people hitting the deck in front of me, I chuckled to myself as I leaned down to pick them up with my best deadlift technique, scooped 'em up and shoved them back into the swirling mass of bodies, piece of cake!  See?  Real world application of gym work.

Apart from the weekend blunders the diet has continued to be really good.  Just discovered cauliflower rice which is fantastic especially when spiced up and I think it's time to do some baking too, I love making bread and cakes so will be a challenge to make something healthy.  Will update next week if successful.  Another 7lbs lost this week even with the boozing so we're well on the way!

Thanks for reading, here's a kitten giving itself a hug..